The East West Arterial project was constructed in the Molonglo Valley just to the North of the Denman Prospect Estate. The project contained approximately 17,000m2 of new deep lift asphaltic concrete pavement.

The project required approximately 130,000m3 of imported fill which was carted from a designated borrow area at the future Molonglo Town Centre on the Eastern side of John Gorton Drive. Woden Contractors used the new intersection on John Gorton Drive to cart fill material across the road and down to the East West Arterial site under traffic lights.

The project contained significant water infrastructure including a large concrete building for ICON Water to house the Farnham Valve Farm as well as approximately 1,200m of 375mm and 450mm DICL watermain along Cravens Creek, across Coppins Crossing Road and up to the reservoir above Denman Prospect. These mains were constructed in very tight and steep terrain that also required large quantities of rock excavation.

Pipework for stormwater on the project also contained large quantities of 900mm and 1,050mm reinforced concrete pipes and large stormwater structures as well as significant quantities of stone pitching in and around the Cravens Creek area.

The project also contained a large twin arch bridge structure across Cravens Creek which required significant water management techniques during construction and associated reinforced soil walls that were supplied by The Reinforced Earth Company. This structure was constructed using our own internal resources and with the assistance of a 350t crane during arch erection.

Complex high-risk activities were successfully managed by the project team.  The site presented with significant plant and machinery roll over risks during tree removal, bulk earthworks and hydraulic works in steep undulating terrain.  The risk assessment and planning that went into the installation of the bebo arches included extensive work at heights requiring the use of harnesses and EWPs.  This then required the development of rescue plans, and careful coordination between cranes, EWPs and ground personnel.   Once again, these systems of work were developed internally by the HSEQ Manager in consultation with the subcontractors and employees.

Environmental protection was paramount with the project undertaken in a declared area of Nationally Environmental Significance.  The steepness of the terrain in areas required well developed erosion and sediment controls, as well as protecting the waterway of Cravens Creek from the construction works.

Other environmental controls included the protection of pink-tailed worm lizard habitat and the abundance of native wildlife that crossed through the construction site daily. 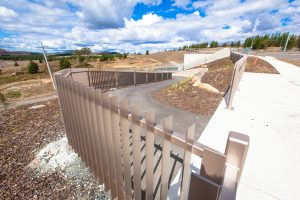 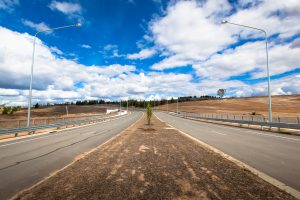 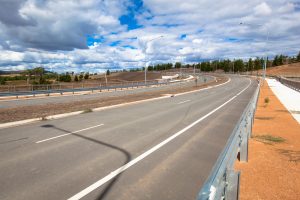 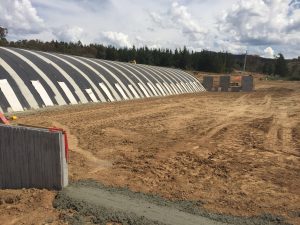 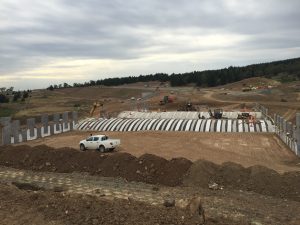